Today, the city of Des Moines received another glowing accolade, this time from the Kansas City Star.

Over the past few years and recently, publications, notable well-known people, and a good part of the nation have taken notice on how nice, progressive, and promising Des Moines is.

As I read the article by Edward M. Eveld, a light bulb went off in my head.

“For as much accolades we have received here in Des Moines, isn’t time we started to give accolades and shot-outs to other places and towns in Iowa?”

Des Moines may be the biggest city in the state, but the rest of Iowa is what helps Des Moines get on a lot of list of “great cities” to live, work, entertain, and visit.

The best creative minds and superstar talent didn’t all grow up in Des Moines. They came from different cities and small towns across Iowa. They saw the promise of what Des Moines and Iowa could be.

The resiliency of Des Moines mirrors the rest of the state. Twenty years ago this summer, Des Moines was underwater. At that same time, Davenport was underwater as well. Five years ago, Cedar Rapids faced the same situation.

All three of them took a page from the rest of the state: you don’t quit…we will survive and get back on our feet. 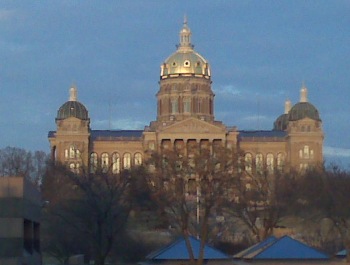 The push to buy local isn’t just a moniker. It’s a fact. Buying local isn’t totally inside the city limits. It’s the surrounding areas and across the state. We believe in promoting our neighbors and friends, far and wide.

Des Moines and Iowa are tied to the hip most of the time. When Des Moines gets noticed, the rest of Iowa gets noticed as well. That’s a unique spot to be in. You hardly see New York State get noticed when New York City gets mentioned.

With today’s accolade in the Kansas City Star, I’ll be in the minority when I say this: I’m giving a shout-out to all of my fellow Iowans outside of Des Moines. They deserve some accolades as well. It’s time for the city I live in to “pay it forward” and let the rest of the world know about our state, the places, cities, towns, and events that make Iowa just as cool and hip as Des Moines.

*- credit to Virigina Slims for the usage of their famous slogan.

If there is a post or something you want to share it with others: Please use these buttons to do it!: