The headline on the sports page of the Waterloo Courier says East Waterloo won the Class 3-A state title on March 17, 1990.  That was the formality.  But when you ask anyone from Waterloo or who played on that team about what it meant 20 years ago today to win the title, it has a deeper meaning.  East had won a state title previously (1974) and most recently (2003), but the 1990 team stands out.

March 1990 was a special month for the Waterloo-Cedar Falls area.  The UNI Panthers beat Iowa in front of the largest crowd in state history, rallied to win 3 games in 3 days to win the AMCU conference tournament, and then shocked Missouri in the 1st round of the NCAA tournament.  The Columbus High girls beat powerhouse Cedar Rapids Jefferson to win Class 3-A, and the Waterloo Warriors won the high school hockey title.

But there was something about the East High Trojans.  That team personified the blue-collar working class east side of Waterloo.  Gritty, tough, willing to fight anyone who got in their way, and talented.  Most of all, they were fun to watch.  High-flying, slam dunks, pumping up the crowd, and tenacity.  No one was going to stop them from their ultimate goal of winning the state title for the first time since 1974.

Their run through the regular season and state tournament did more than bring a title home.  It brought respect, notoriety, and restored pride in a section of town that has been socioeconomically depressed by the dwindling industrial sector (Rath, John Deere, Chamberlain).

Here are a few newspaper clippings of pictures and stories written by Don Kruse from East High’s win over Iowa City High in what was considered one of the best state championship games in state tournament history. 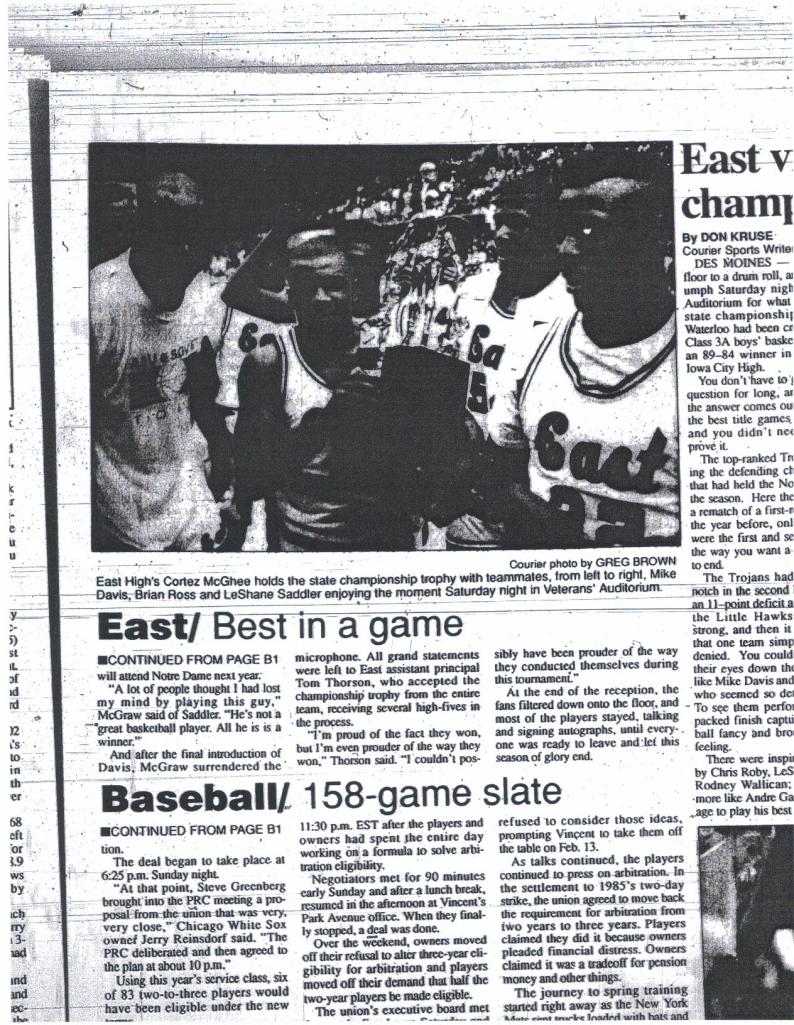 If there is a post or something you want to share it with others: Please use these buttons to do it!: